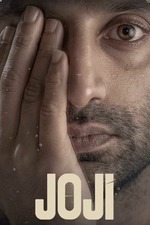 Masterpiece is the word.

This is the instance where you should say Malayalam cinema is growing. Its not just another realistic movie. This is something well-staged. I think director never tried to establish something specific for all the audience equally. Yes, its there but without affecting the perception one personally get. Its open for your narrations and readings in numerous ways. Even though the story is around Joji mainly, the narration is all over the place which is usually become the reason to lose the control over the script. but Syam done the job very beautifully here. Drama / Crime Drama genre in Malayalam Cinema is something which did not tried any different approach in its narration much before. This can be a game changer. Fahad's character is another one to his 'abnormal' character streak. But the very complex character of Joji was made for Fahad.

For some reason, Music, shots & locations reminded me many movies happening in polar regions such as Fargo & I'm Thinking of Ending Things.
An unexpected experience. Never before movie from Malayalam. International stuff. It is something to be experienced by watching, I am out of words to explain or analyse it. I think the takeaways from this movie will be different for each. Giving me different thoughts at a time.
Overwhelmed. Nothing more to say. Take a bow Dileesh Pothan.