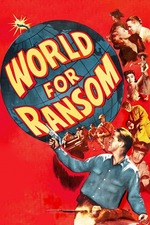 Reading the history of World for Ransom — shot in only six days, with much of the cast and crew of the Dan Duryea TV show China Smith, on with director Robert Aldrich had worked, and on that film's sets — makes it much more appealing in retrospect. Without that information, it's just an uneven, noirish adventure that's interesting largely because of the way it looks, and in comparison to other work by Aldrich.

Aldrich's camera is often far away from its subjects here, frequently high above them, seemingly observing rather than engaging. And, when he does decide to get closer (the takes are often quite long), he favors semi-complicated, careful tracking shots that drop down and around. The angles and movements are noteworthy because they feel unusual — I'm interest to see if the episodes of the TV show directed by Aldrich look similar, and if the sets lent themselves to that specific style of shooting.

Given that it took me several viewings to fully appreciate the performances in Aldrich's Kiss Me Deadly, I don't want to immediately be too judgemental about the ones here. That said, Dan Duryea is very shouty for some reason, and Marian Carr's performance as his character's ex is strikingly mannered, and it's hard to know why. (I've done some reading about the movie, but only about Aldrich himself — if anyone has a line on writing specifically about this movie that will help me dig into it more, please point me toward it.)

In terms of content, it's interesting to look at the different representations of the nuclear threat in World for Ransom and Kiss Me Deadly, given Aldrich's own foregrounding of the issue in the films. In the former, it's in the shape of a human being — it's the man's knowledge that's powerful and dangerous. In the latter, however, science has surpassed man — all we are now just its stewards and, likely, victims. Though Aldrich saw Ransom as a vehicle by which to humanity through comparing two men, Kiss Me Deadly, though it was made only a year later, seems to be sending a much stronger, more pessimistic message about the true state of the world and the relevance of personal principles and ideas.

A Dollar Between the Teeth