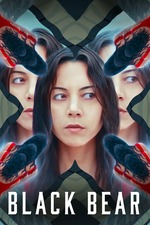 Black Bear feels as if it were written by an A.I. trained on the films of Bergman, Lynch, and Kaufman, as well as the Wikipedia pages for feminism and toxic relationships. Despite a twisty meta-narrative, the film’s multi-layered approach is superficial and cheap; a gimmick employed only to gesture at complexity. Its obscure layers conceal nothing.

The first half of the film features insufferably poor writing and character-work, while the second half, with its slippery meta-conceit, tries to undo or wave-away the earlier flaws. This represents a dangerous instinct of meta-films— using their shifts of perspectives or fictionality to ‘fix’ themselves. To unmoor themselves from a fixed reality-point, and so easily shrug away incoming criticisms. The two halves of Black Bear are incomplete alone, and they remain incomplete together. The film burrows itself in its nest of fictionality, not to draw new insights and connections, but to shield itself from its own weaknesses.

The initial premise is rife with potential, forming a triangular relationship bristling with conflict. A young filmmaker, looking for inspiration, is hosted by a couple at their quiet lakeside cabin. Tensions then rise swiftly within the group, as the guest’s presence destabilizes the already rocky relationship of the couple. But what could be a dramatic standoff is instead hamstrung by its cringe dialogue. Everything comes across as so ‘written’ (and not in the intentional way). The conversations are all malicious and obnoxious, formed from quips and barbs and thistles, dancing around topics without saying anything— much like the movie itself. The couple argue constantly, each contradicting everything the other says. As conflict, it is blunt and unsubtle, and as characterization, it is forced and unearned. They keep scraping away at each other, but it’s vastly different from how, say, Bergman characters reveal each other— for here the ripostes are not psychologically incisive, just loud and bombastic and always at the extremes.

Another counter-example is the work of Charlie Kaufman, particularly his film from earlier this year— I’m Thinking of Ending Things— which features a far more compelling method of blending the same ideas: concept and character, reality and fiction. Kaufman’s films can be said to be solipsistic, but they are so through the lens of an individual, someone who can not escape the depths of their own mind and anxieties. In Black Bear, however, it is the film itself that is solipsistic; everything is ambiguous and formless, except for itself. It becomes caught in the whirlpool between its two halves, each chasing the other in a fruitless circle.

Black Bear wants to express something about the predatory nature of art, the trajectory of feminism, the changing social tide. But it runs over itself, contradicts itself, and undoes its own ideas. Consequently, the film largely exists in the flaws of our current climate— its loud, abrasive, combative, without nuance, and not nearly as smarter as it thinks it is.

The Life of Oharu