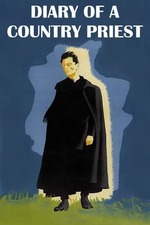 Honestly, I expected to enjoy this one more than I did. I find that Bresson's characteristically minimalistic style has been hit or miss for me. In Au Hasard Balthazar, the pared-down acting becomes a blank well that draws the audience in to fill the film with their own emotions. However, in Diary of a Country Priest, I found that the same restrained acting instead translated only to indifference. In A Man Escaped, Bresson captures a sublime and patient rhythm of procedure, yet in Diary the pace and editing comes off as disjointed (too many dissolve transitions).

Although I didn't particularly enjoy it, it still earns a four out of five. The thematic framework of the film is dense, complicated and poetic. It has a lot to say about faith, loss of faith, social isolation, and grappling with death.