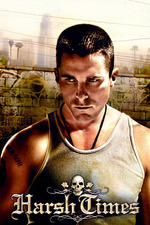 David Ayer and Christian Bale worked together once upon a time, in this little sleeper from 2005. I had never heard of this movie until a buddy of mine brought it up and we kept planning to check it out, but procrastination kept putting it off.

The wait paid off, and David Ayer is a better director than some give him credit for. He may have botched Suicide Squad, but he had a good thing going back in the day. This isn’t his best, but it has a particular feel that Training Day and End of Watch perfected.

My biggest problems were the length and the pacing, at least starting out the gate. Learning about our two bros was a bit of a chore at first, but once you start feeling the chemistry between them, it’s hard to take your eyes off.

Christian Bale puts on an excellent performance and it’s one nobody ever talks about. Coming out the same year as Batman Begins though, it’s easy to see why that overshadowed this. His daily hang out buddy, Mike, played by Freddy Rodriguez also nails the connection and concern we see in his eyes for his frail friend.

Harsh Times hooks you in to the back seat of these dudes’ misadventures and doesn’t let you go until it’s too late. Gripping, funny, and catastrophic, once PTSD gets the best of a life full of ambition.