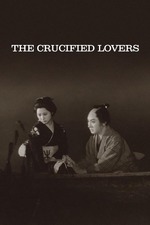 The miser is a good villain; he is easy to hate, defined as he is by his place within the economy as he who voraciously accumulates the power of exchange. The Crucified Lovers' narrative is situated within a specific period of Japanese history, as the merchant class was beginning to rise in power above even the samurai thanks to the improvements in transportation, infrastructure, and technology, allowing for the expansion of trade on the national scale to an ever-growing quantity of consumers. We even hear mention of this during the film, that is, the growing financial subservience of the samurai and bureaucrats to the merchants. Indeed, it was a simple fact of life during the later Tokugawa period that those of the upper castes may have to face the disrepute and dishonour of impoverishment to their creditors—a class (urban moneylenders were frequently merchants) not only near the bottom of the social hierarchy, but also one existing 'outside' ethical life as such due to the imperatives of their occupation.

The story tells us of an unforgiving miser and the way that the powerful use the law to their own advantage, here entrapping two people who, it is later revealed, are in love, in conflict with the social code of their time. In many ways, this film is about value (perhaps seen most explicitly in the marked contrast between how two sets of people treat money). Although the two lovers begin the film in the relationship of master-servant, their moment of liberation—the bliss of being engaged in one's lover's arms—is the ultimate equalising act. Here, there is no longer a master-servant relation (where duty and expectation are intrinsic), but rather one that is zero-sum in regards to what is 'owed'. Nothing is owed in love, just as the concept of value is one totally foreign to it. I would do anything for the man I love; I would die for him without fear, for I know that our love is immortal because it is limitless. It was said in bygone times by Buddhists that if a person died with a smile crossing their face then they had reached the Pure Land. What this means to me is a matter of faith, that is, if we are to believe in love as both a verb and a noun then it must take on a substantial form: as a structure, the cognisance of which allows each subject to truly see 'outside of themselves'. Mizoguchi's best films are always engaged with the 'other' in this sense—because it is not enough to simply introspect, nor is it enough to see from another's point of view; we must rather see the unifying structure itself, hence why so much of his work is concerned for the critique of institutions. In the final analysis, Mohei and Osan's acceptance of their fate in this film is one of the most beautiful affirmations of the content and power of love, which simultaneously condemns the greed of the miser and the so-called 'duty' of the servant to the master. At the end, the miser is exiled but, of course, another rises in his place. (After all, industrial capitalism is still almost two centuries away!) Yet, we shouldn’t forget: death is truly the greatest of equalisers.