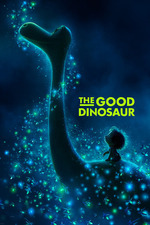 It's crazy how I haven't seen this movie since it opened in theaters. I remembered almost nothing going into the rewatch, which made me a bit nervous. What I can say about this movie is that while forgettable, it has some really great elements. No one can deny that Pixar brings some of the best animations of any studio. This movie is no exception. The common criticism for this movie is the dinosaurs looked cartoonish compared to the landscapes. In some ways, I agree with this; however, I think most of it didn't bother me.

I think where this film loses me is with the story. I'm not saying the story is the worst that Pixar has offered, but it's forgettable. After watching it for the first time a while back, I remember that I enjoyed some moments and that nothing else grabbed my attention. I think the big reason the movie didn't connect with me was the pace. The movie is only about an hour and a half long and feels like they cut scenes. Due to this, some of the moments didn't hit the mark they should have. One example is the river scene, which did really hit me when I first watched this. This time, however, it felt too rushed to feel the emotion. The main adventure kicks off only after one sequence expressing the setback. If they added about 5 or 10 minutes to bridge the two scenes, the emotional hook would have worked better. What I do think worked was the connection between Spot and Arlo. The reasoning is the film does a great job exploring their growth. Even as that worked, I wished that the rest of the emotion would have worked. I still think that if the film were longer to give us time to grasp some of the events, then I would have liked this movie a lot more.

I don't want to say this is the worst Pixar movie, but it comes close. I will stick to keeping it where it is right now. I don't know if I will ever want to come back to this movie because it doesn't have anything to reexplore. Sadly, the Good Dinosaur doesn't hit its mark, but it was still enjoyable in some ways.