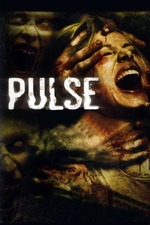 During the 00s (it still doesn’t sound as natural as ‘the 80s’) there was a trend in horror filmmaking. A trend that was more horrifying than anything in the film, but it was on the screen, nonetheless. It was a filter—kind of like you can put on your photos before posting them on Instagram. Everything was desaturated (colors made less apparent) by about 40%, then the contrast (the difference between light and dark) was put up about 200% and then the film was color graded so everything black was black, everything white was white, but everything in between has either a green or blue hue. Imagine The Matrix (1999) or The Ring (2002) (it’s their fault).

Pulse is a film from the 00s and it might be one of the worst offenders of this filter, at least for a film with a big name attached to it. Wes Craven is credited as one of the writers of the script, and he was going to direct but left the production and the script was rewritten (because why use a script by the guy who wrote A Nightmare on Elm Street (1984) and revitalized the horror genre with Scream (1996)?).

To reiterate, the film looks like garbage made by garbage creatures, but, hey, does the look of the film really matter? Yes. Yes, it does.

Pulse stars Kristen Bell in a part that I thought was “before they were famous,” but it’s actually made after Veronica Mars had been on the air for two years. With her is Ian Somerhalder, who had been on Lost before this. See, the film looks so cheap that my brain can’t remember that I actually saw it at the theatres when it came out. It feels like a direct-to-video shit that shouldn’t star these people. Kristen Bell is pretty lifeless, and Somerhalder is on life support. They knew that they shouldn’t be in this either.

The premise of the film is interesting in the way I had to go to Wikipedia to know what the actual premise is and what the fuck was going on. A hacker hacks into a wireless signal that gives people ghost AIDS and it’s coming for his friends (I didn’t read the whole Wikipedia article). It comes through computers and dial-up modems. I don’t know why ghosts would work with new technology like that. It’s based on a Japanese horror film, Kairo (2001), that I have rated on IMDb, but I have no recollection of seeing (I’ve been on IMDb since the 90s and I’ve rated over 20 thousand films, I can’t remember everything). I am sure Kairo makes more sense.

Pulse is an ugly mess that makes little to no sense. I am sure I thought it looked quite cool in the naive 00s, but it’s hypercontrasted-desaturated-blue/green-hued look has aged like milk in the sun. It doesn’t help that everyone in the film realizes how bad it is and that they will maybe make fun of having been in it in future comedies (see Forgetting Sarah Marshall (2008) for that). It somehow spurred two sequels, which I am sure I will end up watching in the coming days since I’m a completionist when it comes to series, no matter how bad they are.