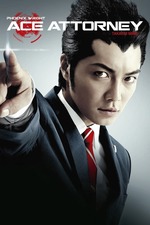 While extremely faithful to the original game in terms of its tone, look, and storyline, I feel like the most of the game's character work was lost in translation. The condensed time spent with these characters means the loss of some great character arcs for Phoenix, Maya, Edgeworth, and Gumshoe. I feel like I barely know who these people are, since the plot is always the focal point of the film and there's little time to breathe.

Coming fresh off the game, I followed the plot well enough but I feel like there are so many details that just aren't explained particularly well, plus a lot of drawn-out sequences. The direction and cinematography were solid but could have veered a little further into the bizarre. Ultimately, it was cool to see the characters in live-action, but I feel like Ace Attorney would be better suited for a miniseries than a regular film. Still, an above-average attempt.