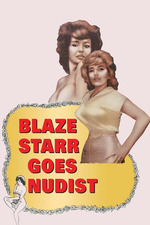 Everyone, I've got a big announcement to make - I'm going nudist, too.

It's just as silly as Doris' other nudist films, but I still found plenty to like about BLAZE STARR GOES NUDIST. The setup - in which Blaze, stressed from her busy life, catches a Doris Wishman film and decides to start spending her weekends in a nudist camp - is a genuinely clever, meta twist on the usual formula. And the camp scenes themselves, always the most boring parts of these, are actually kind of fun for just how absurd they are... I mean, nude archery and nude chess? Doris also shows up to play a role in one scene and voices at least two other characters. It drags a bit in the middle, but I always find it interesting just how rigorously Doris plotted these, by definition, plotless movies.

Maybe more so than any of her other nudist films, this just seems like such a perfect, weird time capsule from the period that it was made. The sugar-coated, pure sexism (and, in one scene from this film, racism) of these pictures is still gross, but there's still something just so wonderfully dumb and genial about them.

Nude on the Moon