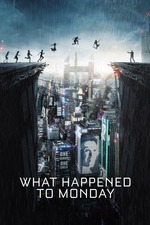 What Happened to Monday

Sticking with my sci-fi binge lately I watched Tommy Wirkola’s What Happened To Monday. Definitely one of the lesser films I’ve seen lately in the sci fi realm, especially coming after I’ve just watched the two Blade Runner movies, although ultimately forgettable I still think this film has something to offer.

The idea of the film is that it’s set in a dystopian future where overpopulation cripples earth and so a rule has been enforced in which no more than one baby may be conceived in each couple. So when a women has 7 identical twins, problems arise. The film attempts to speak to viewer on real world topics as if to challenge us but never presents any ideas that break past the surface level. If I tried hard enough I’m sure there’s something to take from this movie in regards to making tough decisions for the greater good, but that has been done many times in many better ways, so where this film could have been special it’s ultimately  surpassed by the far more formidable films sharing the genre.

That being said there is somethings to like here, clever cinematography sets up interesting rules for the sisters to follow that make action scenes or even some simple conversations much more dynamic and interesting as I as the viewer knew what rules they must adhere too. The special effects are quite impressive as Noomie Rapace plays all 8 sisters but it never really breaks the immersion. Some scenes you can catch the cleverly camera trickery as the sisters never show there faces all at once but it’s hard not to appreciate the work here.

A an easy to watch film that seems to think it’s got more to offer than it has, I would recommend this to anyone whose looking for something in science fiction and with it being easy to watch on Netflix you can’t really be too disappointed.