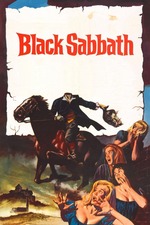 Three shorts, all great but it's the middle one we're all here for. The Wurdulak is a masterpiece.

The first short, The Telephone, plays almost like something out of Hitchcock in the way that it delivers tension based on the discrepancy between what the audience knows and what the characters know. It's beautifully shot (although it pales in comparison to the following shorts) and examines the consequences of resentment, the unwanted results of a practical joke gone too far. It's kind of like a karmically inverted "fuck around and find out" story, where the "finding out" comes not from the person you "fucked around" with, but from yourself, from the cause and effect of your own sadistic scheming.

The Wurdulak is up next, and it's just gorgeous. Bava's misty gothic Russia is not only transportive, taking us to another time, another place, a-complete-nother plane of existence, it's also just pretty to look at. Mystical, baroque eye candy. And at its core it's just as cold as its cobblestone, just as grim as the crumbling necropolis of its hauntingly beautiful graveyard. "The" titular "Wurdulak" is a vampiric monster that kills people and turns them into undead Wurdulak-versions of themselves. Wurdulaks hunt the people they loved most in life, and since they look more or less like their non-dead selves, their mere existence creates a John Carpenter's The Thing–level ontological uncertainty about the identity of the people who matter to you most. You can't trust anyone and especially not the people you love, and as such it becomes an act of bravery to form new bonds in this world where your best friend could become your worst enemy overnight. Love is a trap.

The Drop of Water closes out the anthology, and if The Telephone was about as compelling but not quite as pretty as The Wurdulak, then The Drop of Water is about as pretty but not quite as compelling. It has a striking turquoise and fuchsia color palette and uses negative space to depict the vacuum left by the demise of a wealthy aristocrat to great effect, blowing out the hollow shell of her once glamorous mansion. The vibe and themes are reminiscent of Poe: a housekeeper called in to dress this fresh corpse for its burial steals a large jeweled ring off a dead finger, and the guilt she feels for this transgression haunts her in the form of an ever-dripping water faucet, The [Tell-Tale] Drop of Water.

Lisa and the Devil