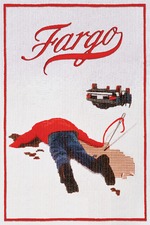 Fargo is basically a perfect movie.

Watched with commentary from Roger Deakins. Here are my notes (converted to full sentences):

- Ironically, Fargo was shot during one of the warmest winters on record, and as a result the crew had to work around when and where there would be snow (shooting scenes that required snow first and saving interiors for later).

- The style is very simple, restrained, and minimalist. Deakins describes the camera as "observational": most of the shots are simple one- or two-shots with few overs (i.e. shot reverse-shot) and almost no tracks, cranes, zooms, or perspective shots. There is an abundance of oners (i.e. long takes), but they're never flashy and don't call attention to themselves. If you think about it, this is really the ideal way to shoot such simple people, and the lack of pompous showmanship is actually quite refreshing (especially in contrast to the recent Birdman).

- The goal with many of the shots was to have the snow-covered landscape meet the cloud-covered sky, so that the world felt like it was entirely white.

- The Coens also staged a variety of scenes so that there would be highways in the background with cars going back and forth. Deakins doesn't go into depth here, but says that the goal was to create the feeling that any of these cars could be carrying people like Steve Buscemi and Peter Stormare.

- According to Deakins (and the Coens), they chose Minnesota not only because it's where the Coens grew up, but also because "polite cultures are the most repressed and therefore the most violent."

- Fargo was billed as based on a true story, but despite some pieces being inspired by real events (e.g. the murder by wood chipper), for the most part this was simply untrue.

"I'm not sure I agree with ya 100-percent on yer police work there Lou."