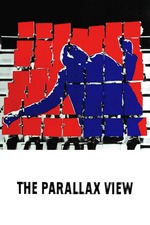 One of the most meticulously staged, carefully composed films of the ‘70s—much is made of Gordon Willis’ mastery of shadow and vanishing light, a tool to shade motivation and highlight a moral murkiness, but it is Alan Pakula’s patience that lifts this into rarefied territory. The recurring motif of ant-like miniaturedom—Beatty’s character trapped in the dam as water crashes through the man made valley; assassination seen from a great height; figures squeezed into airplane bathrooms or tiny apartments and offices; the tribunal at a distant remove, faceless and omniscient—underscores a theme of powerlessness and an inability to effect change, or even be seen clearly. This is the soft middle of Pakula’s famed Paranoia Trilogy, and the least celebrated of the three, alongside Klute and All the President’s Men. Those films—masterpieces in form and tone and propulsion—use conspiracy as a realistic conceit: the Nixon administration’s bungling break-in shaking off a mound of breadcrumbs or a brutal murder uniting a prostitute and a detective. Parallax is grander and more fantastical, and yet surreally grounded in the data points of recent history—JFK, RFK, MLK assassinations—to tell a story so crazy it just might be true. This is a cornucopia of imagery, Willis pulling his camera toward and away from small figures with a voyeuristic zeal and zooming in on big structures in anamorphic wideness: Brutalist, modernist architecture, the infamous Parallax programming video segment, and ancient images colliding with the present world—the totem in the shadow of The Space Needle in the first shot—reveals all the concepts of old power and the falseness of freedom in a post-60s society. Willis shoots linear, mechanical images—marching bands, escalators, patterned ceilings—like horrifying visions of impending doom. The blood seen streaked across the window after the opening killing is a violent society through the looking glass—it’s not subtle, but who wants that? Pakula lets the camera linger in spaces most filmmakers wouldn’t, on a stranger’s face or a provocative freeze frame or a tension-building two shot of men engaged in a silent investigation of one another. This movie isn’t “fun” or “cool.” It looks great and has the smoky, serpentine charm of the moment, but it is quiet, obstinate in its revelations, and mostly unsatisfying. For context, in the first six months of 1974, Paramount Pictures released Don’t Look Now in January, The Conversation in April, The Parallax View in June, followed by Chinatown one week later. These were hits. This one stars Warren Beatty at his most famous and most blank—his alcoholic “journalist” is infrequently indignant about the potential of uncovering a fascist global conspiracy and reluctant to even speak much but he’s a very good physical performer—running, fighting, swimming, slipping in and out of shadow. In a QAnon world, this could be grossly misinterpreted, or worse, made credible. That isn’t the point, I don’t think. There’s no party politics or severity of belief. It’s pure pessimism, the dissolute but gorgeous manifestation of hopelessness. A race toward the light that can only end in death.