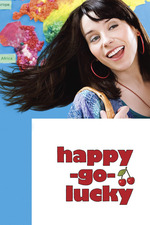 “The weak can never forgive. Forgiveness is the attribute of the strong.”

Predictably, Happy-Go-Lucky's central character, played by Sally Hawkins, has proved to be an extremely divisive figure amongst audiences. It does sadden me that's the case for a couple of different reasons, really.

It's a shame that we are given a very rare example of a completely positive person at the centre of a film and immediately she's cast off by many as having some kind of mental impairment or being a complete emotional zombie. Even if the former was the case, seeing as though we now thankfully live in a society that is becoming more and more supportive of those with mental health issues that affect them negatively, how come progress is a lot slower on the other side of the fence?

Such a debate muddies the waters when it comes to Happy-Go-Lucky anyway. It actually doesn't matter whether or not Hawkins may have some kind of mental health condition. There's absolutely no hint from anyone in this film that is the case and, actually, the majority of people in this film don't seem even slightly taken aback or concerned by her behaviour. That, in itself, is perhaps as refreshing as Hawkins in itself.

Mike Leigh has been quoted as saying that Happy-Go-Lucky is a film that is resolutely anti-melancholic and in that regard he's correct. But the film doesn't just happily sail off into the sunset because right the way through the film Hawkins has to deal with sadness and unhappiness and what I took away from the film is that this is a person that is truly happy - so much so that the hardships of others is not going to affect her own feelings but that she would like to help in any way she can.

Even from the opening where Hawkins tries some chit-chat with a bookshop owner she's dealing with misery. Instead of being put out by what she encounters, she knows when to stop and goes on her merry way. To suggest that Hawkins is without emotion and responsibility is clearly nonsense. The way she deals with a bullying child and her borderline unhinged driving instructor Eddie Marsan is not by forced jollity but by reasoned logic and an innate need to deal with these situations in a positive and forthright fashion.

She's not lacking in self-awareness either. She's more than aware of how others view her, as is completely apparent in the way she responds to Marsan in their final scene together. When she finds herself trying to chat to a tramp on a walk home one night she mutters to herself, "What am I doing?" I think Leigh, who created the Poppy Cross character especially for Hawkins, and Hawkins herself have created a completely fascinating character here.

She's no 'manic pixie dream girl' either because there is nothing fantastical or other-worldly about her. She's not having an earth-shattering effect on everyone around her - in fact, she only really directly affects the lives of perhaps three people in this film. I found her completely fascinating and a breath of fresh air in a surrounding film of interesting and relatable characters and incidents.

Her scenes with Marsan are every bit as exceptional as you would expect from actors of their abilities. Initially starting comical, Marsan is brilliant at the subtle conveyance of change that Hawkins is effecting on his character in a later scene as she probes at him with more questions. But I think also Alexis Zegerman as her roommate and best friend is a really key character too. Although outwardly more downbeat than Hawkins, her mannerisms and behaviour is very reminiscent of her best friend leaving you wondering if such a personality has come about as a result of being with Hawkins so much of the time.

A hilarious scene with an over-emotional Flamenco teacher does feel like it doesn't quite belong here and feels disconnected from the rest of the film. That's not to say I'm not glad it was here because it really is very funny indeed. It's the funniest scene in a film that understands that there can be a marked difference between laughs and happiness and I would go as far to say that Happy-Go-Lucky is easily one of the most effective films I've ever seen at portraying the latter.

One last word on Hawkins - I even more firmly stand by this tweet I posted a couple of weeks ago about her:-