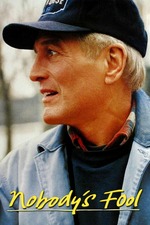 I've decided to vary this Letters Game thing I'm doing by squeezing in different runs of blocks of 10 films from now on. I'm starting with - Rewatches Of Stuff That I Watched Ages Ago And I've Been Meaning To Rewatch For Ages But Never Got Round To Until Now. Man alive that's a good title.

Nobody's Fool is a rewatch that's slightly more pertinent with the recent sad passing of Philip Seymour Hoffman as he appears here as an officious but ultimately incompetent cop. He only gets three scenes but, just a year or two before he really landed on the radar of most people, he's already showing great promise in what amounts to nothing more than a bit-part role.

He is certainly one of the notables in a very strong cast that greatly enhances what is a fairly cut-and-thrust small town American comedy-drama. Probably its main point of interest and attraction is the opportunity to see Paul Newman playing a crotchety old fart who spends his days looking after landlady Jessica Tandy, making sure his best mate Pruitt Taylor Vince has work, hitting on Bruce Willis's estranged wife Melanie Griffith, stealing snow-blowers, drugging dogs and propping up a bar with his useless lawyer Gene Saks.

It's one of those comedy dramas where everyone knows everyone else and when he gets put in jail after an unfortunate encounter with Hoffman, Newman sees the whole town go to wrack and ruin in just a couple of days. Meanwhile, he's got an estranged son (Dylan Walsh) and grandchildren that he wants to bond with. Like I say, it's totally cut-and-thrust stuff.

That said, it is really well performed with some good one-liners and any sentimentality that there is here is, thankfully, treated with a certain amount of self-awareness. Nobody's Fool is the kind of film that if only done in a slightly off-key fashion can become horribly mawkish, predictable and annoying. But done really very well indeed, it only emerges as a solid little film that is unlikely to be anyone's favourite.

That's probably more the case these days than it was 20 years ago, but to a certain extent films like Nobody's Fool are on a hiding to nothing. That it emerges as an enjoyable and gentle ride is a great effort on the part of director Robert Benton, probably best known from Kramer Vs. Kramer, although he does receive extremely strong assistance from a really splendid cast.

Newman is clearly loving playing the grumpy but caring old guy here and his Best Actor nomination for the 1994 Oscars is probably well earned. Willis is the stand-out here, however. This was one of his good films from that extraordinarily unpredictable run of films he did in the mid-90s that at one point went Striking Distance, Pulp Fiction, North, Color Of Night, Nobody's Fool and Die Hard With A Vengeance. He obviously didn't bother reading scripts at that time, he just pulled them randomly out of his mailbox or something. He is really good here and has some great exchanges with Newman.

Then again, so does everyone here. That was the great thing about Paul Newman. He wasn't just a great actor himself but he also seemed to have the ability to make everyone he was in a scene with look better. He also elevates this whole film, too, but he's not the only reason to watch it. There are plenty of other reasons and it probably deserves to be rediscovered on a wider scale.