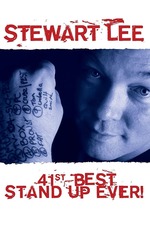 "They're saying I can't have an electric fire in the bath any more, Stew, in case queers see it!"

I wouldn't be surprised if this wasn't one of the most difficult shows that Lee has ever done and, after several subsequent events, it now looks like his oddest. All of a sudden he was gaining mainstream attention as a result of the titular placing in a Channel 4 poll and some of the controversy that was still swirling around him regarding Jerry Springer: The Opera.

Then a year after this he had the TV show that he mentions failing to get in this show, which would then go on to feature one or two bits and pieces from this show. Aside from a couple of bits that drag, even by Lee's standards (not the part about Tom O'Connor, however, which I think is marvellous), this is still an excellent stand up performance that also sees him start to really examine in great detail his manipulation of the views of certain public figures.

Indeed, his piece about Russell Brand is almost essentially backed by this interview with Johnny Vegas which plays around even more with his ideas on Brand (who I really like, for the record). This interview would provide the template for the 'interviews' with Armando Ianucci that would back up his two TV series.

A great show and I think another bit of further watching that nicely accompany this show would be this programme where Lee examines the reactions to Jerry Springer: The Opera and views on blasphemy. All well worth watching.