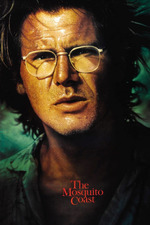 In some ways, Harrison Ford's decision to take the lead in The Mosquito Coast slightly mirrors the decision his character makes in this film.

Ford took on the role in the middle of his 1980s golden patch of critically acclaimed and universally beloved good guy roles. It's a decision that didn't really pay off - The Mosquito Coast wasn't well received critically and it didn't perform at the box office. Again, rather mirroring the failure that his character oversees in trying to relocate his entire family to the jungles of Belize.

But in some ways perhaps Ford's career has floundered in the last decade or so because he hasn't taken enough 'risks' like this. While his place as one of the greatest leading men in Hollywood cinema has been secured a long time ago, he never really took on enough projects like this that really do show off what a fine acting talent he is outside his obvious gifts as a 'movie star'.

He's scratching around in nondescript Hollywood actioners, although thankfully less of them these days, and we're left hoping that the imminent Blade Runner 2 will not only be the great film that it genuinely could be, but that it will reignite his career. Well, I am anyway, because I've been a massive fan of his ever since I was a kid. That hero worship started off the back of Star Wars and Raiders Of The Lost Ark and was the reason why I mithered my dad into renting The Mosquito Coast out from the video shop when I was 11 in the first place.

I saw his face on the front and I thought I would be getting another action adventure with loads of stunts and funny bits and hopefully, maybe, plenty of violence as well. To say that The Mosquito Coast wasn't quite the film I was expecting was an understatement but, interestingly, I remember rather liking it. And really, this wasn't the kind of film that I was be expecting 11 year old me to be enjoying at all.

It's slow and thoughtful and has all kinds of commentaries going on. The commercialisation of America, religious zealots, family loyalty, the threats of industrialisation and deforestation - they're not really themes that I remember being all that bothered about 27 years ago. Maybe I liked it because I liked the bits where they hacked their way through the jungle with machetes and I always really wanted to do that. Even though I know I'd hack my own arm off.

In some ways it could be argued that Peter Weir maybe takes on a little bit too much here, but he comes incredibly close in succeeding to cover all areas. In the end, the views on religious missionaries end up being rather obvious and staid, as do those on military rebels. Additionally, the breakdown of Ford's family is an obvious occurrence but one that's actually handled quite interestingly on one level as we end up being as frustrated at Helen Mirren's refusal to give up on her husband and shake some sense into him.

Perhaps the most interesting message here is the way that Ford sees himself as bringing some civilisation to the villages in the wilds here. Initially he seems to paint himself as some kind of friend to the 'natives' but he's not really. He doesn't embrace any of their ways at all and gradually reveals himself as something of a racist. He regularly decries them as 'savages' and presuming that a village he encounters has taken the three men that would later lead to the destruction of his town as prisoners.

It's an unsympathetic character who only becomes worse as the film goes on. It's all the more so when you realise that this isn't a man who is going insane, but rather a man who absolutely refuses to believe he could ever be wrong. So much so that he thinks carting a load of ice for hours through a hot jungle is likely to be a successful mission, and that building a camp right next to the shores of a tropical delta is a good idea.

Initial admiration and curiosity about his ideals gradually turn to frustration and annoyance when you realise that this worm is not for turning. You do wonder at the start why his family wouldn't object more to just upping sticks from a comfortable home life in America, but it was actually quite refreshing to see conflict between the members not used as the main narrative focal point in a film that has far more interesting things to say. Nor does it hammer home that Ford isn't a particular good father. We can see that for ourselves.

Ford is outstanding and believable, rarely allowing his character to lapse into looking like some crackpot. Mirren seems unsure at times as to whether she should be doing an American accent but is, by and large, as excellent as you'd expect. Andre Gregory is exceptional as an insistent missionary, and you even get Jason Alexander in a cameo as an irritated hardware store clerk and channels some early Costanza as Ford bothers him about Japanese produced goods.

It's good to see that The Mosquito Coast has been reappraised gradually over the last three decades or so. It has now, at least, attained its deserved status as one of Weir's many interesting and under-appreciated films, but perhaps it deserves a bit more than that even.