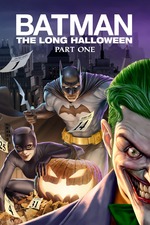 Right now, the only difference between you and me is that I know what’s down here.

The Long Halloween follows the early years of Batman, it’s a murder mystery detective story where a murderer only kills on one holiday each month. Batman has to work with Gordon and Harvey Dent to figure out who the killer is.

Jensen Ackles returns to the DC animated world known for voicing the redhood, here he’s the caped crusader, he did a great job, I loved his performance. Naya Rivera as Catwoman I really like, still can’t believe that tragedy last year. Troy Baker is the joker of course, David Dastmalchian as Calendar Man, Josh Duhamel as Harvey Dent and Jack Quaid voices Alberto Falcone.

I didn’t really like how the animation looked in the trailer reveal but it looks much better here, it looks like a comic book and it’s 3D at times with the way its drawn. It looks like its going for darker shades and detail on the animation, it does have a noir feeling to it, I loved how Gotham looked. It looks better than it originally did but they should of embraced Tim Sales art style. I thought this was entertaining but also boring at the same time, overall it’s just fine, I’m hoping part 2 is a lot better than this and I cannot articulate this enough, the graphic novel is incredible, read it if you haven’t.

Fun fact: This is the sixth comic-book role for David Dastmalchian after Thomas Schiff in The Dark Knight (2008), Kurt in the Marvel Cinematic Universe, Dwight Pollard in Gotham (2014), Abra Kadabra in The Flash (2014) and Abner Krill/Polka-Dot Man in The Suicide Squad (2021). Calendar Man is Dastmalchian's fourth comic book role related to DC.