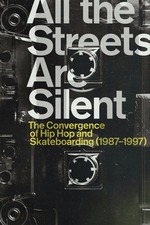 "Skateboarding was like a reinvention of the architecture of New York City."

I have a tough time with most documentaries because they always tell too tidy and altogether utopian a narrative - every doc about a "scene" in a time or place would have you believe it was lightning in a bottle: that everyone knew what they were all about, nobody was making it up as they go along, and (always most importantly) every one was open and accepting of one another. Ironically, this happens most frequently in docs like this one, that are comprised mostly of interviews with the people who were actually there. Who can blame them? We all write narratives of our lives retroactively, and isn't it romantic to think you were once a part of something bigger than you, something that understood what it was as it was happening, something that people will remember?

This is an (all too commonly) troubling documentary for another reason, too: its maker was one of the direct architects in killing its subject matter. Again, it isn't even *really* his fault, any more than it's my fault for taking an interest in all this and then forming some kind of identity around that interest. It's just that that identity is never *just* an identity; that interest is never *just* an interest. Any story of a "scene" under capitalism is also inherently the story of the capitalization and death of that scene. The fact that we know about that scene, the fact that we're hearing this story is because somebody is making money off of it. And it's never the people who made the culture in the first place, is it? Blues, jazz, rock and roll, skateboarding, hip hop. Once people like me know about it, it's already dead. What are we supposed to do about that? What am I supposed to do about that?

This movie ends with two fact crawls: the first crawl is a story of the triumph of skateboarding and hiphop. Supreme was bought in 2020 for 2.1 Billion dollars. It's a meme. You can see it all over the world. The second crawl is the names of the people who made that brand what it is, and what they died of, and at what age. Not a one of them made it to 40.

All the streets are silent. Somebody makes a documentary about it.