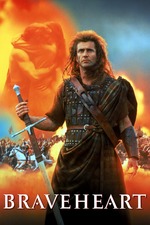 TL;DR - kickin' arses with funny accents.
And, if you want the elaborated version:

Braveheart is a classic film from '95, that tells the story (though in a really not historically accurate way) of William Wallace (Mel Gibson), a Scotish warrior that led a rebellion against Edward "Longshanks" the first, king of England (Patrick McGoohan). Don't have much more to say without spoiling stuff, so that's about right for a general idea of the plot.

Let's start from the things that I didn't like. First of all, the romance in the film and the female characters all suffer from a hella stereotypical, kinda one-dimensional writing. Isabella has some cool aspects to her character, but she could use a little more development in some aspects. I also think that some side characters (especially Stephen, played by David O'Hara) could also use some more development and cool moments :P Feels kinda wasted, tho the film is quite long as it is so maybe it's not a must. And my final complaint on this film for now : the dick showing moment was kinda cringy. Yeah, I've said it, sue me. That's it for now.

The things that I liked here - I feel like the cast is very fitting to the characters, and most characters are really well acted, actually. I think that the dialogue is pretty powerful too - yeah, cliche at times, but hey, it really works. Made me feel stuff XD I get why it became so iconic. Also, the fight scenes are really clever and epic, and I'm absolutely here for it.
This film doesn't have anything that will really blow your mind, probably, but let's be honest here. Braveheart is a very fun film to watch. I had a really good time watching it, and I enjoyed it a lot. The story is energetic and captivating, the characters are a lot of fun even when they're not fully used imo, and there are tons of cool moments throughout the close-to-3-hours runtime.

So, yeah, this film is far from perfect, but I find it truly enjoyable, and I was pleasently surprised even, I'd say. I'm feeling a 7.4/10 on this one.