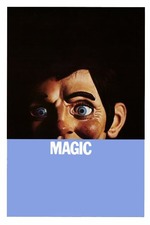 A strange little film with Anthony Hopkins and Ann Margaret at lulls in their careers. He's a magician whose good but socially inept on stage, until he has the gimmick of utilizing a foul-mouthed ventriloquist's dummy to help him out. Suddenly, he becomes a success and can't handle it -- fragile emotions and all. And so he flees to the Catskills where he was apparently raised and where his high school sweetheart (Ann fucking Margaret) lives in an unhappy marriage. The romance has a potential to sparkle, but for the maniacal dummy who wreaks havoc.

On paper, this is ludicrous. (Script by and based on a book by the legendary William Goldman -- who proves here that he's not quite a genius). And on film, it's kind of the same, but there are a few haunting moments and at least one genuine shock. The melancholy score by Jerry Goldsmith helps... as does the grounded, no-nonsense performance by Burgess Meredith as Hopkins' would-be agent.

I guess the film proves that in movies, logic can be an enemy, a friend, or simply dispensed with altogether.