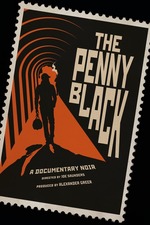 Strangely compelling documentary about a guy named Will whose suspicious Russian neighbor hands him a bag filled with books of valuable stamps to hold for a while. The Russian disappears and Will, whose father was a conman and who purports to live honestly because of that, winds up moving several times... while still searching out his Russian neighbor. But things take a strange turn when one of the books of stamps disappears... And Will takes it a little bit too much in stride.

It's definitely interesting, though by the end you infer a conclusion, without having definitive proof. This is by design, though I wonder if it could've had a bit more finesse.