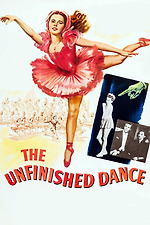 I saw this film as a child and I remembered that basically, a young girl, to protect her idol, an up and coming ballerina, pulls a switch that opens a trapdoor on stage, causing the visiting prima ballerina to fall and injure herself permanently. Well, it's a bit more haunting than even I remembered. The young girl, Margaret O'Brien, spends most of the film in wrenching guilt over the incident and she's a bit of a fantasist herself -- a little too passionate (a/k/a delusional) for her own good... and everyone else's. But then, she lives with an aunt who's never around and is guarded by the clock store owner who lives below.

The film, a glossy MGM production (in that studio's heyday), doesn't go super deep, but the ending, which is supposed to be happy (at superficial first glance) has a darkness that stays with me, but perhaps I'm reading too much into it or imagining what I want to.

Either way, there's something twisted about the cognitive dissonance provided amidst some technicolor splash.

Interesting side note: This came out before "The Red Shoes" by Powell and Pressburger. And further, an interesting companion piece to Peter Jackson's "Heavenly Creatures" though that film is based on a true story.