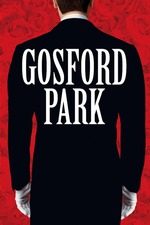 Missed this on its release because, even though it's Altman it's still a British period piece about class and I had fatigue from the 1980s when EVERY film over here dealt with this subject.

It's quite easy to underestimate quite how good this film is if you just watch it as a murder-mystery genre piece or even as a mere study of the 1930s class system.

On a writing level, take a moment to take in the sheer size of the cast and appreciate the characterisation in place for so many of them- helped, obviously, by standard top-of-the-game acting by the mainly British cast. I'm not patriotic, but man we do acting better anyone else by a country (house) mile. Every sentence uttered drips with insight into the character, usually revealing the opposite of the words themselves.

On a thematic-level, this is fantastic exploration of class broadly. The people upstairs happen to be pre-war gentry but they could be modern Royalty, movie stars, city traders, anyone for whom this world seems a playground. The people downstairs could be, well frankly any of us who provide the services and continue to maintain the illusion for the wealthy while we follow their lives and misbehaviour living our lives through them but foregoing our lives for them.

This is how the film works- you watch it, fascinated by this gentle observation of a life long ago, unaware that it's also a caustic criticism of your life.