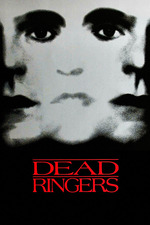 Awkward, stilted, and unenthused. More a harrowing drama with some creepy moments than an all out horror, Cronenberg conveys a novel concept with masterful effects, but it severely drags in between the captivating moments. The concept is compelling: on the one hand, we all wish we had that kind of communion with someone, that sort of magical intimacy they share, having someone basically the exact same as ourselves; yet that one-of-a-kind companionship is scary as hell. But for a film with such striking potential, I'm left feeling mostly empty.