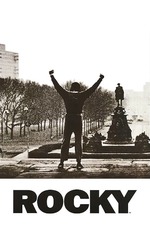 One of the Great American Movies, Rocky is a quintessential depiction of the American struggle, an inspiring story of a man who rises to the challenge and proves to himself and the world that he is more than the bum status his lot in life has bestowed him. Often considered the blueprint for sports movies and a staple in the "underdog story" genre, it is surprising that the creative minds behind Rocky seem to be coming from a place of such utter frustration that their vision cannot see a way out except temporarily through fantastical stories such as this movie itself provides. It's noteworthy that everyone around the titular character is struggling equally—perhaps moreso—and it is only due to absolute freak chance that Rocky is awarded the opportunity that the movie is then about him rising to.

Of course this is not the intention of Rocky. The filmmakers were going for something heartwarming, the archetypal underdog story. But in going the extra mile and depicting the essential struggle of everyday Americans, and then allowing only Rocky to triumph over it due to sheer American luck while everyone else remains in the unfortunate socio-economic position where they started, the statement being made (intentionally or otherwise) is that growing up in the slums is a life sentence for virtually everyone, and the hopeful idea that some make it out only strengthens the resolve of the hopeless to accept their misfortune. Rocky offers escapism through its lead character, but it simultaneously establishes that in the real world, nobody could ever truly break free of the backbreaking rat-race of American poverty. Only within the luck of fiction is there hope.

This is what makes Rocky such a seminal classic. True blue American escapism of the highest order, that understands how badly such an escape is needed. A truly triumphant fantasy starts off level with the audience and then takes us into the world of the narrative, taking us on a journey from where we are to where the movie ends up. Rocky's best moments are not in the fights, nor in the training; the film is at its peak whenever it's just the titular fighter struggling to make ends meet and retain some self-respect in a society that abandoned him and treats him like trash. He's a simple man, but a full-fleshed character, and while he and I are polar opposites in terms of our personalities (oh how I wish I was dumb and motivated instead of smart and lazy) he is such an easy character to root for, a man with no inherent flaws except the external misfortune of being born less-than.

But then the climactic boxing match happens, and Rocky doesn't win – but he goddamn good and well goes the distance. He stays up, he proves to the world and himself that he belongs, that he matters, that he's worthy of his own life and humanity in a society that has tried to convince him otherwise since the day he was born. He doesn't transcend status, or rise above the slums, he doesn't change in any essential way; he proves that status is less substantial than passion, greatness not predetermined. One of the Great American Movies.