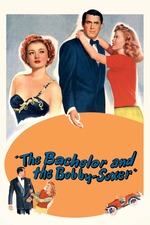 A somewhat unlikely scenario, which certainly hasn't aged well, is offset by an immaculate Cary Grant in full force urbane sophisticate mode, the persona he chose to inhabit (with a couple of exceptions) for the majority of his film career post Hitchcock's Notorious. Shirley Temple is fun in one of her better later roles, and Myrna Loy was always a good match for Grant, even when the films weren't all that great. Also bringing their A-game are Rudy Vallee as the stuffy Assistant District Attorney and Grant's rival for Loy's affections, and Harry Davenport as a crotchety uncle. The film relies on some expertly timed slapstick (Grant's bread and butter) and some choice one liners, such as Grant referring to himself as 'recommended for children', with an appropriate tone of disgust. There's also the infamous nonsense dialogue:

Screenwriter Sidney Sheldon won the Oscar for best screenplay with this stuff.