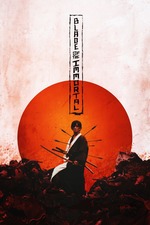 Blade of the Immortal

Omae wa mou shindeiru (and he wishes he was too).

As ever with Miike, there is no sense of control, and that always jars for me when he’s being ‘serious’. There is enough ludicrous hack ‘n’ slash action here to make it noteworthy in the ‘Absolute Carnage’ subgenre, but it’s mostly a broad meditation on violence and revenge. All in all, very familiar territory, but there’s an interesting visual conceit wherein Miike refuses to focus in on individual deaths in massive set-pieces, instead filming it as a great blur of bodies and flashing blades. That in itself is weirdly thrilling, turning swordplay away from its balletic origins and more into a horrifying mosh pit. The more Manji kills, the less he deserves to die, and with one body hitting the floor every couple of seconds in the film’s louder moments, the cumulative effect of violence is overwhelming without resorting to too much ‘ha ha lmao gore’. Fascinating, but flawed, but what else should I expect from this prolific sonuvabitch?