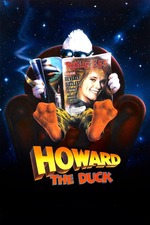 Notoriously noted as one of the “worst films ever made”: Howard the Duck had some large expectations to fill if it was to join the extensive pantheon of the absolutely abhorrent train wrecks I’ve watched before. I guess thankfully, Howard the Duck isn’t nearly as terrible as the masses would possibly leave you to believe, but it’s still hot garbage.

I could go into extensive detail about the many plot-related issues that Howard the Duck has, because there’s plenty of them to go around, but if we’re to be honest, even if we’re looking at an extremely loose adaptation of a comic book series, we’re still looking at a comic book adaptation, all things considered. The Howard the Duck comic series has an extended history of absolutely bonkers stories, even at the point in which this film entered production, and I honestly can’t say that this is really an issue with the screenwriters, more that it’s an issue that Howard the Duck is just completely unadaptable, at least in a live-action setting. The prime example of just this whole idea not working the way it’s intended is seeing this absolutely horrifying romantic subplot between Howard and a human woman, which at one point spawns the beginning of what appears to be a sex scene between the two; besides the cringe running rampant during that scene on just the sheer idea of what’s going down, it further drives home the point that the zaniest of ideas presented within the original comic series just can’t translate to film in a respectable manner.

As this bizarre tale kicked off, I was shocked to see that Howard the Duck somehow got a PG rating despite the sheer amount of sexual jokes and even full-on nudity that it presents! Not only does Howard look at a pornographic magazine clearly spoofing Playboy (including a centerfold exposing “duck breasts”), but also a moment where when Howard is blasting off into the human world, breaks through the walls of a neighboring apartment showing a “topless” female duck in the bathtub. If bizarre nudity wasn’t enough, there’s frequent blatant sexual gags including the appearance of a “duck condom”, and the aforementioned scene where Lea Thompson tries to seduce Howard in her apartment, only wearing undergarments. The PG-13 rating was established and introduced onto the scene two-years prior to Howard the Duck; how this got a passing rating for children to see is baffling!

Besides the story just not working out the way it was intended to, and the fact that the film clearly has no idea on which demographic it’s trying to appease by its ridiculous MPAA rating, there’s a lot to admire about Howard the Duck on a technical level.

For being a contender for one of the “worst movies ever made”, Howard the Duck is a rather aesthetically pleasing film; there’s some rather fantastic uses of lighting and color in many scenes, as well as extremely impressive visual effects which have aged rather well for the time they were introduced. The Howard costume is also extremely impressive, as well, with a full-body suit for actor Ed Gale to walk around in, with a fully animatronic head placed on top. For an 80’s animatronic, the amount of visual detail put into the helmet as well as the sheer number of facial expressions possible through the helmet are stunning to witness. There is so much obvious love and care put into the production of this film, and the effort truly shows with how fantastically the visual side of Howard the Duck has aged, but it’s those before-mentioned scripting and overall adaptation issues that really drags this film down as a rather terrible film.

It’s a bit of a shame that with Howard the Duck being the very first Marvel Comics adaptation, that we haven’t seen any real efforts to bring Howard back to the big screen besides extremely brief cameos in both Guardians of the Galaxy movies and a “blink and you’ll miss it” appearance in Avengers: Endgame. I’d like to see Howard come back in some way to reminisce about old 80’s cheese, but I doubt that will ever happen.