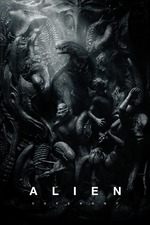 Initially took this as a theatre of cruelty, where the transmission of shock and sickness from film to viewer was the whole point. Now it's clear these things were diseased all along. Many have accounted for the Lovecraftian drive of Prometheus/Covenant, where the humanist project is rebuffed, not by a universe of malice per se, but an indifference that cannot be reconciled within scientific or religious epistemologies. The films work through the promise of discovery, but what will be discovered is the already known unknown of Alien. There is an antinomy staged between knowing and being, where to ask questions of our being is to reveal its emptiness, and to forgo being is to arrive at an even broader cosmological nothing. Scott's antihumanism then is less geared toward relishing human extinction than just levelling criticism at the kinds of questions we ask: why we are, rather than how we should be.

Prometheus/Covenant move the locus of the human from workers in Alien to missionaries and colonists, completing the map drawn by Horkheimer and Adorno of the enlightenment machine. Their claim the "Enlightenment, understood in the widest sense as the advance of thought, has always aimed at liberating human beings from fear and installing them as masters" gets at the knowing/being paradox of Scott's films, where the human is abstracted from the material world in order to gain epistemological dominance. The films respond in turn by exploiting this breach, allowing characters to continue their search as their bodies are indiscriminately torn to pieces. This positivist trap follows the drives of recent speculative realism, where enlightenment thinking continues to reveal new horizons of human finitude. Alexis recently objected to my emphasis on this tangent, as, she urged, these films don't seem preoccupied with thinking so much as with the stupid agony of living. I take her point. Anything that proposes the cosmological insignificance of humanity while removing the subject from its analysis repeats the Enlightenment hubris of extracting the thinker from the world, and in any case why is there so much drama to apprehending the total void of meaning at the essence of human life? It's almost sentimental to worry so much about the 'world-without-us' (Thacker)! Instead the desire to know and the stupid agony of living must be seen as coconstituent.

Ironically a non- or post- human approach then should be traced from the failure of knowing to the alienness of the human body, and this dumb corporeality is the heart and soul of Covenant. Where its predecessor both understands and ridicules the Promethean spirit, this is the gravity of the encounter. Alison Sperling argues for the primacy of the body in Lovecraftian fiction, which is to say the encounter with that which is beyond human cognition does not simply show up the weirdness of the world as it is thought, but radically deforms the world and the body with it. She argues the grim detachment of speculative thinking takes from feminist materialists such as Haraway, Hird, Alaimo, but rescues the subject from its intercorporeal entanglements — a point that's staged over and over through the mutations and readymade deaths of Covenant. Like Texas Chain Saw these abruptly halt everything about the subject as a thinking being and leave behind not voids but life beyond the human. What's gained from this is a cosmological picture that's received in the agony of embodiment, where the human is descended from aliens and births new forms, which even when the human is alive is not fixed but is instead porous with ancient and novel nonhuman entities. The turn from black gunk in Prometheus to spores in Covenant is a move to ecological porousness where mutation is not a decisive moment of infestation but occurs like the sun rises and sets, like the lungs drawing oxygen. Scott's annihilation/regeneration cycle then is not something frighteningly out there but recurrent at the level of what Hird calls 'microontology', pictured here in particles that move through individual eardrums or paint black clouds and fall from the sky like rain on an entire species.

The film's opening scene sets in motion a primordial unease, with Weyland watching as David processes the fact he will outlive his father. Casting these films in Alien's past allows Scott to emphasise the horror not of the vastness of space, but of dilating timelines. The sense of time in Prometheus is sublime, rather than its mountain ranges and alien architecture. Lovecraft commented on his own work "Conflict with time seems to me the most potent and fruitful theme in all human expression" — that is the corporeal body against infinity, the faithful subject and aeonic creator deity. Covenant though operates through the sublime of the flesh turned inside out, of the individual spore, the alien birth, the body folding like a sheet. David names humanity as a disease and Scott is only halfway sympathetic. Descended from the technocratic Weyland, David's preoccupation with endlessly advancing efficient, desubjectivised life is no different than his father's progress without ethics. Death in Covenant is always felt like a shock, infection a kind of ecstasy. Nothing means anything and that's the beginning; its antihumanism is not nihilistic but a reorientation or hopeful indignity.