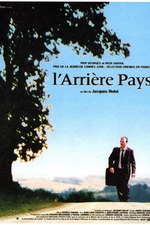 The "fucked up families and you can't go back home" theme again. 1st feature written directed by and starrring this great French actor (imagine a more urbane, laid-back David Niven, basically the kind of guy the word "dapper" was invented for). I was drawn here because this was nearly a Claire Denis joint, but she ended up being unavailable so Norot directed it himself - with Agnes Godard on the camera. A piece of near-autobiography I guess. Norot plays the gay black sheep son of a rural barber who quit the sticks for Paris at age 16 where he became a TV actor (almost-following Nolot's own trajectory). The film tracks his return to the titular hinterland due to his elderly mother's illness. After she dies, various family secrets come to light, and we see various pointed interactions with the quietly-despised macho uglymug brother and various other people he was glad to leave behind, and will be again. I expected this warm but unsentimental slice of life to go into full steam Pialat/Cassavettes territory at any moment, but Nolot is far too much of a chill dude for any of that - nobody even raises their voices here and much is implied rather than brawled-over. At the end, the Nolot character reconnects with life at a local fair and the kind of sensual and dreamy photographic inventiveness that Agnes Godard specialises in comes out of the bag. A subtle, no-big-deal-at-80-mins, but masterful and affecting film. Keen to see Nolot's two other features now.