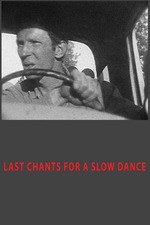 Been intending to check out more Jost for a while as I rather liked his autobiographical essay film "Speaking Directly". A highly regarded and very much self-styled/opinionated "fierce American Independent", this is Jost's first narrative fiction film and I would guess it is an attempt to merge the post-underground styles of its era (think early James Benning or Bruce Baillie on heavy downers) with the more mainstream early 70s "bummer, dude" narrative style (a la "Five Easy Pieces"), also a strong element of the European "anti-illusionist"/politically-holier-than-thou scene (Straub-Huillet et al). Sounds made for me, right? I dig all 3 styles. Sadly it was a huge disappointment. I wanted to like it. Cool title and that, you know. A sorta road movie and "character" study of Tom, a jobless drifter on the road in the Midwest after finally being dumped by his long suffering wife (named Darlene, natch...), made on a miniscule budget, the film suffers from poor technical quality and non-professional acting which is more awkward and stilted than naturalistic. However, a lot of films I've enjoyed have overcome these hurdles or even turned them to their advantage. "Last Chants..." has much bigger problems than those. Tom is of course a self-centred misogynist and misanthrope. If the point is to critique "toxic masculinity" it's fairly damp squib as its easy for pretty much anybody to feel superior to this guy. Tom is a stock character who we have seen rather a lot of in American cinema (even/especially in the late 70s), and no nuances or subtleties whatsoever are revealed here. When (spoiler) Tom commits a murder at the end, its not exactly a revelation. That's the kind of thing these type of stock characters do. There are a few scenes of visual inventiveness (a sex scene that plays out with feet in the corner of the room while the TV centre field blasts out Johnny Carson) but unfortunately most of the experimental techniques consist of the kind of sub Brakhage wobbly camera-isms you'd expect or a camera pointed at nothing in particular for long stretches. We have a blank screen for brief periods where we hear country songs performed by Jost himself (they aren't bad if you like that kind of thing) which I guess is a second rate attempt at something like Ken Jacobs ace "Blonde Cobra". "Last Chants"... plays out in total ignorance of that other American Independent tradition, the exploitation/horror circuit which no doubt Jost wants no part of (his writings seem disparaging of most other film makers!), where characters and situations like these proliferate, often with more successful formal and narrative developments. Towards the end, Jost decides to finally jolt the audience by throwing the close up decapitation of a live rabbit in our faces, suggesting that he's closer to the grindhouse scene than he'd want to admit to. I'd love to know what exactly what the point of this film is or why Jost thought this carnival of the utterly predictable and hackneyed was at all worth pursuing. At the end, a title card announces that this film was made for only 2000 dollars. Like, is that meant to be some kind of boast or some kind of apology?