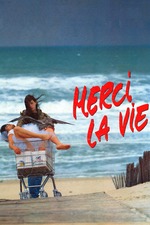 Always hoped there would be a masterpiece in Blier's grab bag of bad taste, narrative reshufflings and absurdity that turns from comic to tragic (and vice versa), and it looks like this here big budget 90s arthouse/pop oddity may be it. This will be a hard one to write about without spoilers, though admittedly if you want to watch a film in which lots of unexpected and unpredictable things happen, this is for you. Starts with a battered bride in a shopping trolley and the end credits roll over an old man shitting in his wheelchair, which gives you an idea of what kind of "level" a lot of this operates on, but how we get from there to there is of course far from straightforward. "Merci La Vie" commences like "Thelma And Louise" as directed by Fellini on super-hallucinogens as two young girls on the run (brilliantly played by Charlotte Gainsbourg and Anouk Grinberg) cause/find themselves surrounded by a battlefield of destruction and broken hearts. The leaps in time, space and setting that Blier usually does are ridiculously frenetic and (if you aren't prepared to lie back and reject the linear) confusing. We have two films within a film, both or neither of which may be related to the film we are watching, with two directors (neither apparently played by Blier). Its the sort of film where if you see characters going through a doorway they'll come out the other side wearing different clothes, or with a different personality, or in a completely different genre of film. Towards the end, a character says "which era are we meant to be in? If there's nazis, there should be no AIDS". Yes, there is AIDS and nazis and a lot else besides. As to what all this stream of consciousness mayhem adds up to, and why I found it so moving and mastery, I'll put up the SPOILER flag now and tell you. For me, Merci La Vie boils down to a young girl (Gainsbourg) and her dream or fantasy or nightmare or reverie of what her future life has in store. Grinberg is her more confident and experienced imaginary best friend, who she may have based on a character she saw in a film set during the WWII occupation. Or the homework she repeatedly talks about wanting to do is on this subject, who knows. Judging by one weird scene, she's also been reading Bataille. Nothing is clearly spelled out here and the narrative never settles into a fixed meaning of any kind. Hopes and fears for a lifetime, anticipations of pleasures (cool boys, a loving family, adrenaline pumping fast cars etc) and pains (disease, abusive men, horrible families, Holocaust-level evil returning to Europe). This for me was the kind of ideal "dream film" others have seen in Lynch "Mulholland Dr", which I thought was OK (OK...very OK indeed!) but for me got a bit too bogged down in clichés. "Merci La Vie" consciously revels in clichés, but treats them like costumes to put on and quickly discard, just as when you wake from a dream for a few seconds, you'll land in a different place when the dream resumes. Will be thinking about this one a lot and will need to check it out again soon. Another thought: maybe because I'm pretty much the same age as C.G. this moved me so much. One for the 90s kids?