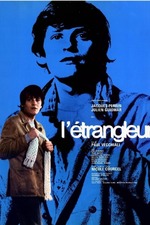 Can't get enough of these post-new wave French guys and sadly Vecchiali is one of the most obscure names involved - there is very little writing on him in English and not too many films around with subtitles. I've managed to see a few and they were all mighty good but all wildly different from each other. At the Top of the Stairs (1983) was an actorly excavation of wartime trauma based upon the director's own somewhat sordid family history of nazi collaboration, showcasing 1930s film star Danielle Darrieux. Don't Change Hands (1975) was utterly bizarre, a hardcore porno thriller as directed by Jacques Rivette with a headfull of classic surrealism. "The Strangler" is Vecchiali's curious take on the very 70s psycho killer thriller genre. A dreamlike prologue show a young boy sneak out of his house to witness a stranger strangle a crying woman with a white scarf. He grows up to be a copycat killer, deluding himself that these strangulations are "mercy killings" (the women he strangles are lonely and suicidal). An opportunist thief called "The Jackal" trails him and empties the dead womens' handbags. Also on his trail is a sleazy cop who resigns from the force in order to pursue the "white scarf killer" by extra-legal means. The fourth main player is a mysterious woman obsessed with both cop and killer for reasons unknown (a stand-in for the audience?). These four archetypes are moved in around the narrative like pieces in a board game, leading to an unpredictable and highly improbable emotionally-fraught climax. I need to watch this again to get anything like a viable take on it, but the overall impression is a logical extension of the French tendency to frame the Hitchcockian thriller as a language, and this film as the expressive delerium that results when you shift a few of the variables around.