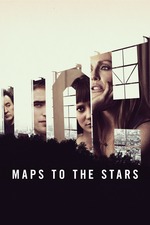 This film is extremely colorful and very much a David Cronenberg affair. . Most of the characters are either clinically insane,drug addicted ,homicidal
see dead people or all of the above.

It's very off beat, off color with some hilarious even if at times very offensive dialogue. There's male full frontal nudity semi erect.Somewhat explicit sex scenes that include Julliane Moore who isn't shy about being nude either. She looks quite beautiful in some scenes with her being much blonder for this role.

The characters are not afraid to say and go places that are somewhat taboo.For example, Julianne Moore who plays an actress named "Havana Segrand" farting and talking about her bathroom woes or how she was molested by her late mother.

John Cusack and Olivia Williams play a married couple who happen to be brother and sister. Robert Pattinson is completely miscast as a limo driver whom doesn't lend much at all to the story but looks good doing nothing.

Mia Wasikowaska of (Stoker) fame plays "Agatha" personal assistant to Julianne Moore's "Havana" she has burns on her from a fire that she may or may not have caused.There is a very unexpected bloody and brutal scene that took me by surprise,and I'm still trying to wrap my mind around the ending. If you like bizarre films you will probably enjoy "Maps To The Stars".