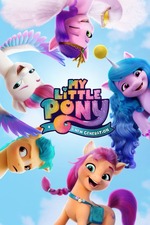 TWILIGHT, WHAT THE FUCK DID YOU DO?!

Before starting, I must make something clear: I’m an MLP fan since 2014, so this is a special case for me, because I can’t be impartial or objective, I see and judge this movie AS a fan, I can’t do it in any other way.

Friendship is Magic marked a before and after in animated series (despite the seasonal rot in seasons 8 and 9 and its horrendous finale), showing that girls also deserve good cartoons and that if they do well enough, can attract an alien audience that can enjoy it even more than the target audience. Coming back to that world that attracted both children and adults with a new cast had its risks, and I can say that although not everything went according to plan, I'd dare to say that it even surpasses the series in some aspects (except in animation, even the original movie is better in this regard).

The passage of time in Equestria has its effect on all civilizations, in how the Mane 6 and their actions have become a myth that has been perpetuated in future generations, but nobody has an interest in it because everyone has continue with their lives (reflected in their brief appearance at the beginning). The idea of abandoning and forgetting magic is interesting and its consequences can be seen in each of the races. However, the distance of the journey is questionable (all cities seem to be closer than they appear), and personally I despise the presence of TV's and cell phones in a fantasy world like this (as much as the plot tries to justify it). There's fanservice, but it's dosed so as not to lose the attention of the story.

The characters are charismatic enough to maintain interest in the plot and in their bonds as the plot progresses, Sunny and Izzy being responsible for showing it in their interactions with the other races. However, as much as these characters try to have their own identity, it's inevitable to feel that the screenwriters copy-pasted the original Mane 6, as there's a Twilight, a Pinkie Pie (better controlled in her humor), a Rainbow Dash and a Rarity (Hitch stands out for the wrong reasons, but he's just a Flash Sentry with personality). The villains are very reminiscent of the Fairy Godmother-Prince Charming dynamic, but they're pure filler. The songs are catchy and enjoyable despite not being as memorable as those in the series. Despite its obvious flaws, it's a good start for Generation V that includes a beautiful message of togetherness, tolerance, solidarity and reconciliation.