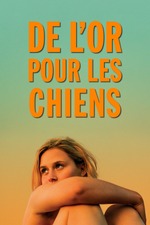 When it comes to movies that unexpectedly switch genres halfway through, I've enjoyed a crime comedy that turns into vampire horror, a road movie that turns into a psycho thriller, and at least one rom-com that turns into an end-of-the-world nuclear holocaust nightmare. But Gold for Dogs has an unexpected genre switch that I very much do not like.

The film follows Esther, a teenager who's been working in a seaside ice cream shop in the south of France. Her summer has seen her lose her virginity to her colleague Jean, and they've hooked up numerous times over the weeks, but now the season is over, it's time for them to go their separate ways. But Esther can't get Jean out of her head, and so she catches a train to Paris.

That's what happens in the first half, anyway, and it's a pleasant if unremarkable slice of romantic/erotic drama, with some party vibes, shameless shagging, and Esther wandering around in a notably gaudy jellybean-print dress. But she ends up lost, sad and with nowhere to go, which is where we segue into the second half of the film. And that's when it gets really boring, though Esther does adopt a nice tabby cat for a while to liven things up.

I confess, I'm not at all sure what the second half is actually trying to do. Our heroine definitely spends it "finding herself", and finding peace, to an extent. But it's not as though she'd gone madly off the rails in the first place. She was just a 17 year-old girl doing what many 17 year-old girls do. It's as if the film is telling her to pull herself together, calm down and grow up, yet she was already one of the calmest lead characters I've ever seen in a film! I'm sure I must be missing the point, but it's left me pretty bewildered.

Funnily enough, the end credits match the structure of the movie, beginning with upbeat music and funky graphics, before switching to a regular text scroll accompanied by some tedious, acoustic singer-songwriter shit. Am I being trolled?