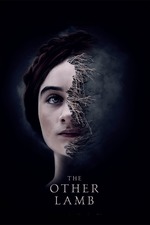 Yet another slow-burning, arty horror film about devoutly religious people, The Other Lamb doesn't actually go as far into the genre realm as other similar works, though you could easily find two dozen still images that make it look really dark and amazing. But it is not amazing.

It concerns a countryside-dwelling cult of women: the Wives, who are all married to their male leader known as the Shepherd, and the Sisters, who are the daughters they've had with the Shepherd. The implication is that, once the second generation has grown older, the Shepherd will make them his wives and procreate with his own daughters. The matter of what happens to any male sons who are born is, surprisingly, only marginally explored.

The problem I have with this premise is that it's never convincing. The Shepherd, who's obviously an extremely dodgy man, seems neither charismatic nor manipulative enough to have been able to start such a cult and persuade the Wives to leave the modern world in the first place. Okay, so he targeted very vulnerable women, but he's fairly young, so it's not as if he snatched them when they were children, and yet they've all come to accept that menstruation is a punishment from God and that they should be shunned during their periods. I know that people of faith believe some mad shit and close their eyes to rationality, but in this case, I simply never bought it.

So that's the premise, but what of the actual story? Well, it's essentially about one pubescent girl slowly coming to realise that the Shepherd might be a bit of a cunt. To which I can only say: what took you so long? It's a nice-looking film, the atmosphere is dreamlike and there are bursts of nightmarish bloody imagery. But for a piece about religion, it remains unexcitingly secular throughout, never once doing anything unpredictable or particularly interesting with its creepy concept.