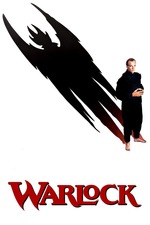 The score was good and all, but I don't know how we have come to an universal agreement as a society that this is a horror film. It is a film about a goofy witchhunter who travels through time to hunt down an even more goofy warlock and he then joins forces with a ditzy 20-something years old woman in modern-day Los Angeles to finish his mission. This is a fantasy film, not a horror film. I guess all the explicit mentions of SATAN may have been scary to god-fearing Americans or something? Regardless of all that, this was kinda fun.

Yeah so we are dealing with a beefy witchhunter from the 17th century who have to deal with the modern world. There are a lot of jokes about him struggling to understand modern lingo and modern technology. It is kind of standard stuff for the time travel subgenre really. But I must say that the film really manages to squeeze some fun stuff out of a rather generic formula. The chemistry between the witchunter and the modern day woman really helps the film stay fun even through the slower moments. I love how the woman is such a fucking weirdo that she doesn't really help the witchhunter understand her time period, but rather just makes it more confusing a lot of the time. It is a very pleasant odd couple comedy kind of thing.

The evil warlock was also lots of fun. I loved how he also didn't understand the modern world but he just rolled with it and had a blast while invading occult bookshops and making flying potions out of the fat from children. The dude also looks like a skinny Triple H, which further adds to his villainous aura.

There are some half-decent special effects here, and some that are not so decent (those flying scenes were something). I think what I enjoyed the most outside of the fun chemistry between the leads was the playful witchcraft lore that is carefully explored. Of course hammering a nail into the footprints of a warlock will cause him to roll around in pain. That is like witchhunting 101 kiddos! And of course the Amish are your most trusted allies when witchcraft is abound, I hope that Amish farmer made it back ok :( I will call him Brobram because they couldn't have done anything about that warlock without him.

Eventually the literal witchhunt comes to an end, and when you consider the eventual scope of the warlock and his evil scheme, then the film just kinda ends on a very unassuming note (one hell of a curbstomp in there tho!). The film also ends on a dull romance angle that really doesn't mesh with the rest of the film. It just screams of forced studio interference. But still, I had a lot of fun with this. It ain't no horror film though. Lord Of The Rings is more horror than this.