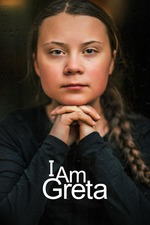 ‘I want you all to panic’

Though the documentary on the surface feels remarkably by-the-numbers in terms of filmmaking in style at first, as the movie goes on you see how access and style come together to create a brilliantly human look at Greta’s life both in and out of her vitally-important climate activism.

What this film does in capturing the person, the 15-16 year old teenager at the heart of this film, is put us in her shoes. It’s difficult not to look at the climate emergency and everything going on in the world at this moment and not feel a bit hopeless. Singular actions are important and I try and do what I can, vastly reducing my meat intake and being conscious in reducing my footprint (I only drive because I live in a remote area of the UK with prohibitively expensive public transport), but it’s hard not to feel like it’s meaningless. Human actions contribute to global emissions, sure, but it’s corporations who contribute so much to the climate to the point where our future lies in their hands. Under capitalism there’s no motivation for these corporations to change, and though the wider system needs to change, protesting world leaders is our only hope in this current moment to save the Earth from destruction.

When the actions of the person feel meaningless, it’s hard not to lose hope. Enter Greta Thunberg.

Through this film, we get to see both sides of the activist, in both her private and public space. For those who hadn’t followed or appreciated her campaign before, it allows you to see just why she’s so angry, and you can see how much it means. It’s also hard not to get angry when you see her impassioned then see crowd shots at UN conferences where leaders are on their phones instead of caring about change. It’s hard not to blame Greta for taking her headphones off hearing Junker talk about toilets after her speech.

Through access and a style that keeps close and personal to Greta for much of the film while absent enough to not feel it interfering with the story, we see the person and we see the fight from all sides. It’s hard not to be inspired.