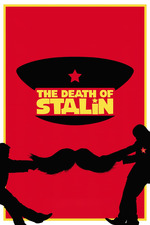 I have been excited about this film coming out for a while. I love Ianucci's brand of comedy, I love graphic novels and I studied Russian History in the 20th Century at university. This movie combined all three of these loves.

This is an excellent movie. Whether or not you know anything about Russian History doesnt matter (but please know that as silly as many of the things that happen in this movie are, many of them are true). Ianucci has written one of the wittiest scripts this year and I hope that he gets the Oscar nomination that this script is worthy of.

The cast are all amazing. Instead of worrying about getting their Russian accents right they are allowed to use their own voices (except Isaacs who strangely chose Yorkshire - but that made his character even more perfect) the actors got to worry about their comedic timing instead which was impeccable. I havent seen comic timing with the delivery of lines as sharp as this since the early days of Monty Python. Therefore I was even more intruiged to see Palin get a rare role in modern cinema - did this echo of Python for him too I wonder?

It's easy to praise people like Isaacs who fill the screen the moment they arrive on it - but truly the whole cast are worthy of the highest praise. Friend, Riseborough and Considine all having smaller roles but being equally worthy of a mention for their comic acting alongside Palin, Tambor, Buscemi and co.

This is one of the best films of the year and I think it will go largely undetected which is a shame. Ignore the BIG films. I know Blade Runner 2049 is out and I know Thor Ragnarok comes out this week but please MAKE TIME for this movie. One of the best comedies written, directed and performed in modern cinema.