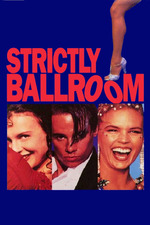 I've seen a few films by Baz Luhrmann in the past, including Moulin Rouge and Romeo and Juliet, and have had mixed opinions on them. While there are aspects of them that I really like, they just never really manage to win me over. That said, his directorial debut Strictly Ballroom was a pleasant surprise. It really won me over. It is definitely the least Baz Luhrmann-ish film in his filmography and is all the better for it.

The film is set in the highly competitive world of ballroom dancing and follows Scott Hastings, a brilliant young dancer who dreams of being able to dance his own unorthodox steps. When his dance partner splits with him weeks before a big competition because he refuses to dance the traditional steps, Scott's parents, especially his mother, go mad. He needs a new partner and Fran, a relatively new dancer, is more than willing to step in. Strictly Ballroom has a really strong script that is made up of a number of different clichés, such as the rebel who shows the naysayers wrong and the ugly duckling. However, the way these storytelling clichés are used feels really quite refreshing in this film. This film is proper escapist fare and is all the better for it. The plot flows really well and has a number of crowd pleasing moments. The final dance scene is a particular favourite of mine. The dialogue is also really fun.

Strictly Ballroom is Luhrmann at the beginning of establishing his own style and benefits greatly from this. It isn't bogged down in very heavy and over the top visuals. Luhrmann's direction is really solid for a directorial debut. It is very confident and assure of itself. It has its moments of silliness but remains on the right side of over the top to still be enjoyable. This also applies to the production and costume design which is wonderfully garish. Luhrmann puts together a great ensemble cast who all give brilliant and fun performances. Highlights include Paul Mercurio and Tara Morice, who have wonderful chemistry as the two leads, and Pat Thomson as a wonderfully hideous pushy stage mum. The dance sequences are also excellent and the soundtrack is a delight.

Overall, Strictly Ballroom is a great and fun film. Its just wonderfully entertaining. The story is a real crowd pleaser and has terrific performances from a great cast. The direction is confident and adds to the fun tone of the film. It is pure escapist fun. Strictly Ballroom was a complete surprise for me and I can happily see myself watching this film again and again. An unexpected delight!

Side Note: This film gets extra bonus points for being one of the name sakes for one of my favourite tv shows.

Carry On at Your Convenience