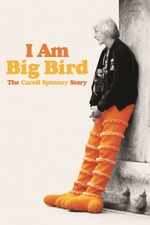 Big Bird doesn't exist in Dutch Sesame Street - instead, we get a bright blue big bird who vaguely resembles Big Bird, not that this should impact a Dutch person's enjoyment of this documentary. I always kind of hated the Dutch big bird, but Spinney's creation is a thing of wonder.

It's been ages since I've seen 'Being Elmo', but I couldn't help but think how both of these documentaries focus on how Elmo and Big Bird's puppeteers were outsiders, and how they channelled that feeling into their characters. This is the beauty of Sesame Street, or Jim Henson's Workshop on a whole, of course: a world where everyone is welcomed and included.

Big Bird is essentially a 4-year-old child, and seeing the world through his eyes only brings to mind how reality doesn't always match up with that worldview. There are many moments in the film that made me tear up, you just can't help it. The film felt emotionally sincere, however, it never manipulates you as other documentaries often do.

The behind-the-scenes stuff about how Sesame Street is made is wonderful, as are the insights into the early days of the show, of the bond the puppeteers and actors felt. Beautiful use is made out of Spinney's extensive archive of home videos, and you do get swept up in the nostalgia of it all.

It's a warm, fuzzy blanket of a film, but in the end, it's a bit too rose-tinted. Sesame Street taught kids how to deal with their emotions - the episode dealing with Mr Hooper's death has gone down in television history as a prime example of emotional sincerity, but in this film, there are glimpses of a darker side to Spinney's life. I'm not saying the man needs to lay his soul on the table because the film was unbelievably candid as it was, but the frequency of darker subjects being swept under the rug frustrated me. Spinney's frank admissions of the hardships in his life were more than the audience had any right to demand of him, but if you give insight into your life in such a manner, it feels emotionally insincere to conclude it with a recurring conclusion of, "at least there's Sesame Street".