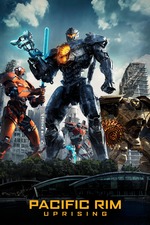 Pacific Rim Uprising: I enjoyed the first one. For what it was i.e giant mechs vs giant monster, it was an entertaining ride when helmed by someone like Guillermo Del Toro. Uprising, on the other hand, is a mess.

Apart from some of the action sequences and John Boyega, there isn't much else in the movie that I actually liked or enjoyed. The girl was fine but wasn't really given much to do with. I liked John Boyega because even though the writing wasn't good, the dude had charisma and energy which is something he has shown in every other movie as well. Good actor and being the son of Idris Elba in this movie, he kinda fits in that role.

The visuals/CGI were inconsistent, some of the daytime sequences didn't look good at all, too much apparent green screen usage. Some of the movements of both jaegers and kaijus didn't have that exact weight-ey feel to them reducing the feel of GIANT things fighting each other (it was there, just not as good as part 1). The sense of scale wasn't that great either. Combine that with a forgettable soundtrack that barely used the iconic theme from the last one (which should be considered Blasphemy as that theme is <3 ), boring and annoying secondary characters screwing the pacing up, a ridiculous plot, and an attempt to commercialize the world in order to crank out many sequels, this was a typical disappointing sequel..

Been looking forward to the sequel for a long time now, so this is a disappointment.