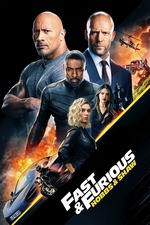 Hobbs and Shaw was wildly disappointing. The biggest issue off the bat is Hobbs and Shaw themselves. They’re both incredibly cocky and arrogant and constantly talking about how they can’t work with each other EVEN THOUGH THEY WERE ON THE SAME TEAM IN FAST 8. there’s multiple sequences of them going back and forth trading terribly written insults and it’s completely insufferable. This movie thinks it’s so funny and it rarely is. A big difference from the fast and furious series is that there’s no heart in this movie whatsoever (aside from some forced stuff in the third act) There’s also some weird cameos that aren’t funny and felt super forced. There’s a couple cool bits of action but nothing great.

I think the Fast and Furious franchise should’ve ended after 7. 8 was fun but that’s when it jumped the shark and now the story is too ridiculous and there’s no emotional center. I’m weirdly not excited about F9 at all. Bummer

Edit 8/4/19 8:36am: it’s the next morning after the movie and I have more opinions I want to share. I’ve been thinking about the toxic masculinity in this movie and how absurd and over the top it is without ever really commenting on it. Hobbs and Shaw are in an excruciating dick measuring contest where they’re constantly trying to have a better one liner than the other and seem more badass, and it’s so ludicrous because they’re clearly assholes, but the movie still wants us to believe that they’re super cool and like them. It seems like they’re playing themselves in the sense that they have giant egos and are constantly fighting to seem like the most badass. It’s kind of pathetic and not charming at all like the other FF movies. Those movies definitely have some agressive dick waving, but those characters like each other and always have one another’s backs. In this it feels mean spirited and pointless.

The Rock has a love interest in this movie and it doesn’t work at all for me. There’s something weirdly asexual about the rock and he’s never had a convincing romance on screen (although I haven’t seen all of ballers). He’s best when he’s playing a charismatic badass who’s also a good father. He does that a little bit in this but even then it doesn’t work. There’s a scene where he’s having a conversation with his daughter which is hilariously vague and he says something like “sometimes things happen to people and they can be bad but these things happen”

Statham is generally cool and fun to watch but it’s just exhausting. This feels like his character from Spy but with no irony whatsoever.