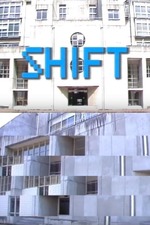 The image as a surface and movement as transformations of the plane. Of a piece with Ito's Box (same location incidentally) and Spacey, and other similar works that interrogate illusions of motion within sequences of still images. But whereas Ito's art is concerned with generating fantasies, moments of trickery for the mind, Matsumoto's Shift complicates the those relations so as to make really unclear this disjuncture between captured motion and stills. His genius... to suffuse the frame, in-post, with two additional axes of movement; one for depth to mimic the zoom function of the camera lens, and one radial axis to play the role of a pan. Then, in his process of shifting those cut-up still images along these virtual lines, he recreates the captured motion of film by separating the visual subject (the landscape) from the camera movements, which are reduced to artificial translations of the image plane. This goes a step further than Ito, who fixates only on the duality between stillness and motion through space. Matsumoto goes so far as to flatten this motion itself and, much in line with the paradoxes of Zeno, reduce an actual 3D-space to the eye's perception of 2D-screen. His final shot of this, a circular window whose frame form square grids, is the prefect representative for these ideas Matsumoto has on display; for it encapsulates so compactly his ideas about dimension and transformations by depicting a Polar-coordinate axis layered atop a Cartesian one. Truly mathematical, much more than Frampton's Zorn's Lemma in fact, because at play in the formal processes are those systems and objects from mathematics. In this way, the Queen of the Sciences can be understood as the subject of Shift and more. Incredible stuff! Matsumoto's video art is something else to behold!