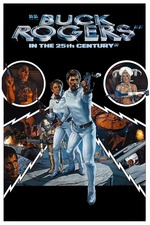 Buck Rogers in the 25th Century

Originally I was gonna critique how the movie feels more like a TV pilot movie, but it turns out that's actually what it was. So, rather than a bad thing this is rather good. Having read the Eltingville Club, I was wondering why Twiki never actually said "Bede Bede Bede - Okay Buck", but I guess that was more common to the series. The opening number is terrible for a film, but great for television, which describes the story of the thing as well. It's all really bog standard stuff, with the one exception being the horror of Earth having gone through a Nuclear Holocaust almost immediately after Buck was launched in 1987. I don't know how much attention was paid to this detail in the series, but it'd be expected for something as dark as that to be pushed to the side for space age action antics. I do hope that Theo shows up again, because he was completely unexpected and also a breath of fresh air. C-3PO type intellect without the snobbishness, and makes for a great comedic duo with Twiki's inner-city mannerisms. The action scenes, both on the ground and in the... Space were both very well done, along with the miniatures and the special effects (for the time). I really like how Buck's ship, Ranger 3, looks like the shuttle of our times but not quite.
And yeah, there is a lot of stuff that feels lifted from Star Wars, such as the shape of the pirate ships or the initial tracking shot of the Draconian mother ship that was parodied so well in Spaceballs. But I don't really see much of that as a bad thing since all I listed is all I noticed, and that for all it's salt the rest of the picture is your generic Space Opera, with the plotting Princess Ardala, her Vizier Kane, and the Dragon bodyguard Tiger. I really should watch the series sometime, but I'm not gonna run out and "buy" it just yet. Not when I have so many other shows that I want to watch more, such as Duck Dodgers.