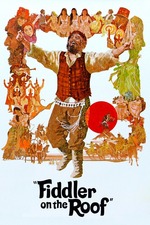 Fiddler on the Roof

Tevye is the milkman in the village of Anatevya, and is very bright, very faithful, and very poor. The story mainly concerns the marriages that three of his five daughters go through, and his reactions to them ("On the Other Hand" and its 2 reprisals). As is traditional to the culture, a matchmaker would make suggestions for marriage, and assuming the parents of the son & daughter could reach an accord, a contract would be drawn up. Tev's eldest daughter, Tzeitel, is in love with her childhood friend Motel, a poor tailor who manages to gather up enough nerve to confess his feelings to Tev and ask for permission for them to be married. The marriage ceremony is lovely ("Sunrise/Sunset"), features Tev and Lazar Wolf the Butcher, who was supposed to be Tel's husband before Tev went back on his word, nearly coming to blows, and Perchik, a Bolshevik from Kiev who came to be a teacher, breaking the mechitza to dance with Tev's second daughter Hodel and pulling everyone else to join in, before being broken up by the town's military police at the behest of the Captain's superiors. Quite a lot of the town is ransacked as Tev looks on aghast.
We skip ahead in time, past the harvest into the middle of Winter, and Perchik has finally asked Hodel to marry him, the two only asking for Tev's blessing, not his permission. Tev decides to give them both, and then talks with his wife Golde about whether they even love eachother, in a touching song where they realize that they do. The next day at a demonstration, Perchik and his comrades are arrested and sent to Siberia, where Hodel follows. Meanwhile, Chava the middle child falls in love with Fyedka, a Gentile, which is the one line Tevya cannot bring himself to cross, and summarily disowns her after she marries Fyedka in the town church. Soon after, an edict from the Tsar casts the Jewish population of the town and all adjacent ones out of the country. Even with all this weighing on them, Tev only barely manages the smallest of goodbyes to Chava, the first words he had spoken to her since she married outside the faith and likely the last.
The future prospects for each couple seems to correspond to the degree to which they spurned tradition: Mot & Tzei will live a very happy life in New York with their child and sewing machine, assuming they are able to get into the country; Perch & Hod will have a chance to live together in peace, assuming they don't die in Gulag or for the Bolshevik cause come February and October; and Chava & Fyedka are moving to Poland, enough said. I have talked to some length about my views in relation to Judaism and its practices, and I can only understand Tevye's decision regarding Chava based on them going through with things behind his back. The third reprisal of his monologue never gets to his daughter's eyes, because he has already decided she is no longer his daughter after she had undergone a Gentile wedding. And it's tough for me to postulate on whether Fyedka could have convinced Tev to change his mind again, because Chava decides to take the reigns, absolutely flubs it, and we never see all that much character to him aside from his love for her; Which even in his last time on screen seems to be pulling her away from her family, in the way he puts his hand on her shoulder and she turns around, but that may be me overthinking things.
My favorite song was Sunrise/Sunset, but the visuals to Tevye's Dream were glorious.