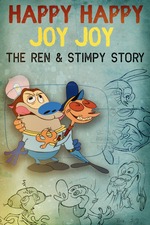 A revival of the show is in the works on Comedy Central with Bob Camp attached to supervise and act as showrunner, as he did for the latter half of the original show. I'm still interested to see what they do with it, but after watching this my hopes have dropped a hair.
When I was a child, my exposure to the show was very intermittent. I only saw the more popular episodes being constantly repeated, Stimpy's Invention, Space Madness, Sven Hoek, etc. I also had the first two tapes, one of which I watched so much it broke, that had more obscure things like Log, Untamed World, Robin Hoek, and Stimpy's Big Day, which I know now to be the first episode. Then in middle school, my science teacher played the show for the last week of the semester, and told us that Fire Dogs was the missing episode (Man's Best Friend) when I kept asking him to play it. And now, despite owning the entire series on DVD, I still haven't sat down and watched the whole thing.
The documentary itself, which to my surprise actually does have John K himself giving little snippets and anecdotes throughout the whole thing, starts with his youthful fascination over the medium of animation, and how through his father's "kindness" he managed to learn how it works from a flip-book, setting him indelibly on the path that brought him to where he is today. Once he meets Lynn everything else happens so quickly: the move to LA, the founding of Spumco, the pitch to Nickelodeon, and Lynn's departure before episode 1 even airs.
There's a lot of talent at Spumco, full of names I never realized I recognize such as the late Chris Reccardi, and this is the reason why I'm just a bit less thrilled for the revival, because when Spumco turned into Games after John's fatal error over Man's Best Friend, Chris and a lot of other people didn't follow Bob over, and Bob blew up at them. I don't know if anyone other than him will be involved, because as John stresses, it was him who shaped the minds on the original show to be able to put out these things in a a way that could live up to his impossible standards. Adult Cartoon Party failed because it was just John, and I'm afraid whatever this is will fail not because of the Cal-Arts peons kicking up dirt over it, but because it'll be just Bob. Not to discredit the Games run, because until now I had no clue they were that different, but because a name can't carry a show.
Then there's the yak in the room, the allegations. John still sticks around to talk about it, which surprised me again. I half expected him to storm out of the room, but he states his piece, which is thus: I regret it. I still don't know if it ever got to be more than words, but living together and behaving like an old married couple is still horrible when the other person is only 16. But Robyn is very adult with how she views the show, in light of everything. Where one of the other boarders said "now the characters are covered in shit paint", she essentially says [paraphrased] "it's not for me anymore, and if you hate it go ahead and hate it, but if you're on the fence, you don't have to think about him." If she could get out of that situation and see the show that way, then everyone else can too.
A final perspective is the undercurrent of a narrative that they try to fit in, not trying to force you to think that way because I think everyone who's a fan of the show has heard the story of John's dad telling him, in reference to the episode "A Visit to Anthony" for which Anthony's dad is modeled after him, "You made me look weak." You just have to watch the episode to understand the impact that sentence has. Getting back to the doc, there are other little stories of John's dad that I never heard before: how he became fascinated with facial expressions from the journeys his father's face would go through when he chewed him out; how after hitting the big time, his dad said "good job, but quit it with the space stories" and he actually never did anymore after that; while relating how George Liquor was not representative of himself at all, but a treatise on the contradiction some authority figures display, he idly says "it's my dad"; and how when he left the network and was battling for the rights to Ren & Stimpy (who he never actually pitched himself, they were side characters in one of his other pitches), he asks to at least be able to keep George, which the network gladly gives back. Combining all this with an earlier interview that they put in at one point to highlight his relationship with Lynn and how he relates to Ren ("well, i'm not gonna say i identify with an idiot, but i do identify with an asshole"), and the visceral nature of Ren's beating on George and his refusal to back down over it airing, and the last request he makes of the network, it makes you wonder about just how much John's dad impacted his life. It's the easy thing to shift blame to one's parents, but I think there's enough blame to go around for both him and John.